Price - $150 for a 60 minute lecture and power point presentation.

Please add $50 if outside a 60 mile radius of CHARLESTON, SC.

What makes a military general great?

Some may say perseverance, shrewdness, and keeping cool during a crisis. Some may say a professional military education. Either way, in its nearly 250-year history, America has produced some very good generals. Each was great in his own way, in the circumstances of his time and in the qualities that America needed.

“Be not afraid of greatness. Some are born great, some achieve greatness, and others have greatness thrust upon them.”― William Shakespeare ―

Who they were. How they thought. The decisions they made.

How they made HISTORY.

A retired Air Force Lieutenant Colonel, Tom Worsdale served on active duty for 24 years as a squadron commander, instructor at the Air Force Academy and a public affairs officer.  He has been assigned to Air Force bases throughout the United States and served overseas in Guam, Saudi Arabia and Kuwait.

Tom also worked for the Navy for 14 years as a civilian at Lakehurst, NJ, giving him a total of 38 years with the military.

A native of Brooklyn, NY, Tom holds a bachelor’s degree in Economics and History from Clemson University in South Carolina and a master’s degree in Communication from the University of Northern Colorado. 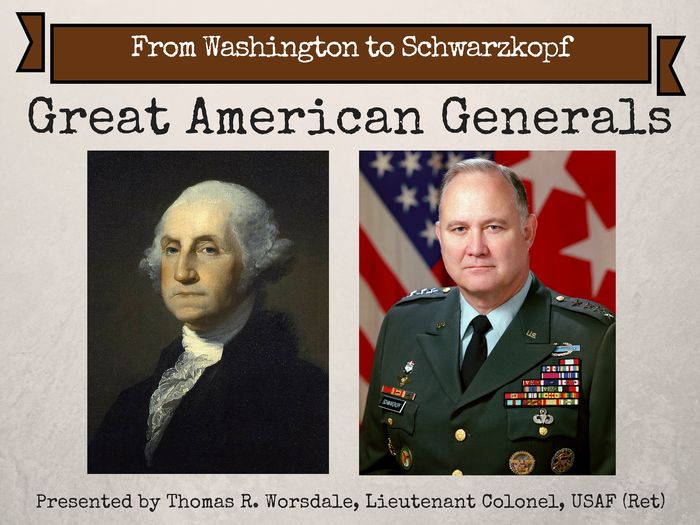 Please note that this is a lecture with a first class POWER POINT presentation. Tom Worsdale will not be costumed.